I married my high school sweetheart, way back in the time of the dinosaurs. The marriage didn’t last, but the recipes I learned from my mother-in-law did. One meal that was a part of my ex-husband’s family culture, to the point of being nearly religious, was pork chops and noodles. Basically, it’s pork chops braised with butter and water, with egg noodles and bread crumb mixed into the resulting broth. I wasn’t even allowed to have the recipe until after I was officially a married lady.

Changing up the recipe is a kind of blasphemy, especially considering that I cook for two Lamare kids on a regular basis. But I’m a fly-by-the-seat-of-my-pants kind of girl. Plus, I wanted to use my slow cooker and make it a little more elegant. The result was amazing. An updated version of one of my family’s favorite comfort foods.

I give you my Blasphemous Pork Chops and Noodles. 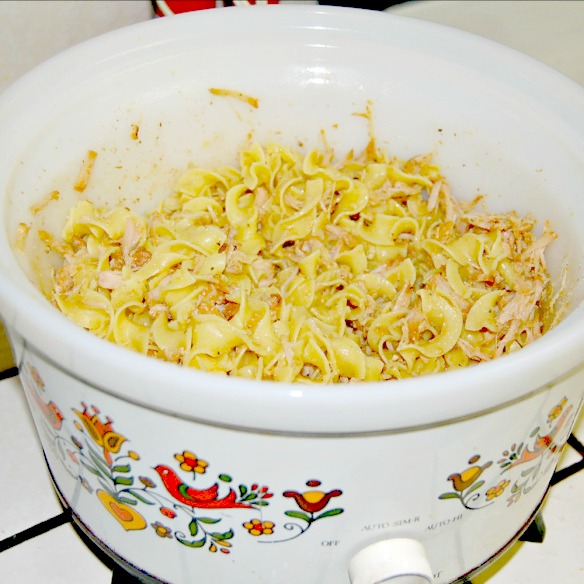 (Why yes, I do have the cutest slow cooker there ever was!)

Put the broth, butter, onion, garlic, apricot preserves, salt, pepper, Italian seasoning, and dry mustard into the crock of your slow cooker. Whisk to combine, then add the pork. Cook on high for four to five hours or low for eight to ten hours. About half way through the cooking time, turn the pork chops so that any part that wasn’t already submerged is.

When the pork chops are done, start cooking the egg noodles. Take the meat out of the slow cooker. Remove any fat and use two forks to shred. Put the meat back into the crock.

When the noodles are cooked, drain them, then dump them into the slow cooker with the meat and broth. Sprinkle bread crumbs on top and mix everything together. The bread crumbs make a kind of dressing when they’re mixed with the liquid. That’s the consistency you’re going for. I used about a cup of bread crumbs, and it turned out perfect. You might like more or less, so just use your judgement. Taste for seasoning.

Tradition calls for serving pork chops and noodles with applesauce. My kids actually stir it into their noodles. Leaving it off might have caused flat-out mutiny in my house. I like to serve this with green beans or a salad.

Click the recipe card below to print (without the graphics.)

Hello! I'm Shaunta and I'm so glad you came by! If you're the creative, right-brained, born-disorganized type, you've come to the right place. Click on the buttons below to check out my three main series.

Find What You’re Looking For